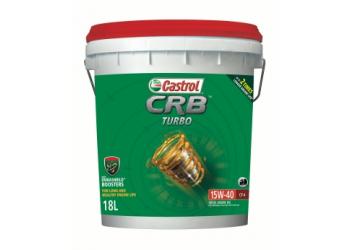 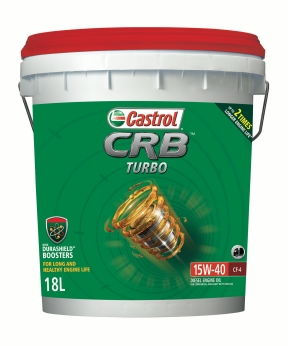 UP TO TWO TIMES ENGINE LIFE* FOR MIXED FLEET EUROPEAN, US AND JAPANESE TURBO-CHARGED DIESEL ENGINES.

Castrol CRB Turbo 15W-40 with specially engineered DuraShield™ Boosters gives you up to two times engine life*, so that you are ready for every road.

• Preventing the agglomeration of soot as well as removing harmful soot particles from metal surfaces.

• Providing a protective film on the moving metal surface which resists breakdown even under difficult conditions, maintaining the film layer.

• Delivering improved deposit and corrosion protection by resisting thermal breakdown of the oil, and by neutralising harmful acids.

It is recommended for use in all naturally aspirated and turbo-charged diesel engines fitted in trucks, tractors, buses, goods carriers (LCVs), off-highway equipment, 3-wheelers and gensets.

*in on-read truck application, based on time between cam shaft rebuilds in a severe engine test