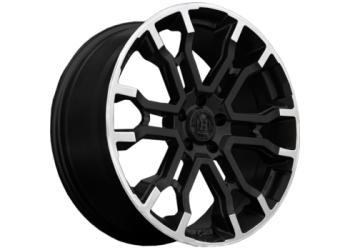 The CROSS SLEEKERS T6 decorates SUVs in the city scene with a powerful silhouette and a premium feel. The new T6 LIMITED EDITION adds a new value of impact and elegance to the compact SUVs. The outline DC applied on the rim end through the spoke end completely changes the image of the T6. The outline DC forms a (T) shape to express the powerlessness and the rough and tough image. The T6 LIMITED EDITION also has the premium and glorious brightness in addition to the toughness that suits SUVs. The gorgeous black, diamond black color was selected to combine these two images. This paint contains aluminum flakes and shine brilliantly when receiving light, and also colors the wheel elegantly. For the center of the wheel, the new and exclusive silver almite center cap is prepared for this T6 LIMITED EDITION. On the spoke surface, logo machining is applied to express the high level of quality. The metallic shine of aluminum gleams throughout the wheel to emphasize the premium feel. The T6 LIMITED EDITION expresses toughness on the outdoor scene, and coolness in the city. The T6 LIMITED EDITION enriches the fascination of the compact SUV concept of being both active and cool.